The idea for this post came from My Brian is Completely Empty you can find their blog here ( https://mybrainiscompletelyempty.wordpress.com/ ). I would also recommend reading their pieces on ‘bad’ and ‘boring’ anime for more context. So, what do I mean by bad anime. There are any number of flaws that could make an anime (or any story for that matter) bad. It could be bad writing, problematic elements or awful animation among other things. But the first two are the ones I’m going to be talking about here. The animation is usually pretty obvious, sometimes it isn’t the fault of the creators either. Digimon Tamers for example was made on a budget, the animation is not as good as the first two Digimon series. But even with that Tamers remains my favourite because of good writing and great characters even if the animation isn’t as polished as it could be. By bad anime, I don’t mean anime that is boring. I find dissecting bad anime a lot of fun, I enjoy analysing stories just as much as losing myself in a good story.

That bring said there is even bad anime that I can not stomach and have to abandon, an example being Citrus. I’ve already made a post about Citrus, so I won’t go into much detail here. The anime is badly written filled with problematic elements and makes me uncomfortable. I dropped the anime after only the first few episodes, it was rubbish. So, I have two bad anime that I haven’t talked about yet on this blog. I’ll dive into the problems with these shows and why I still have fun watching them. Sword Art Online is probably the most infamous bad anime out there. SAO starts off really strong and the first few episodes are actually really good. We are introduced to Kirito, Asuna and Klein within the space of a few episodes. Each of their character introductions are very strong. A good idea of who they are is painted. They are not fully fleshed out and well-rounded characters though. It isn’t possible to establish them as that within a few episodes. Character development needs to be consistently done throughout the whole story until the very end. SAO never really develops its characters beyond these cardboard cut outs of the first few episodes. It’s not as though everything in SAO is bad. The romance between Asuna and Kirito is handled very well, the animation is good and the concept of being stuck in a virtual world is an interesting one. A lot of good shows get a lot of mileage out of it. However, the problem with SAO is that doesn’t do much with the concept, in comparison to other shows such as Digimon. I enjoy learning about how this concept can be done badly because it teaches me where to avoid these pitfalls in my own writing. Bad shows are like a ‘How not to write’ guide for me. SAO is perfect for ‘How not to write a trapped in another world’ story line. I find it fun watching just how bad it can get, sometimes the writing in SAO is so bad I have to laugh and other times I have to cringe. So that is why I enjoy SAO, not because it is good but because it is bad.

My next anime is the second season of Black Butler, it is rather infamous. The first season was a self-contained story with its own ending, only loosely built on the manga. The second season was advertised as a new Butler and Master. Alois and Claude were the focus of the first episode. During that episode some interesting things were learned about them. Alois is openly what TV tropes called cute and psycho. Switching between cute and charming to cruel and psychotic in the blink of an eye. Claude meanwhile is a stoic, constantly rolling his eyes at his master. The other characters introduced include the triplets whom like Claude are stoics and Hannah the maid whom is rather sadly looking on at Alois. This is an interesting setup, it not only revisits the formula of the first season but puts a new spin on it, this could have made for a very interesting new story. However, all that is thrown out the window with the return of Ceil and Sebastian as the main characters by the end of the first episode. 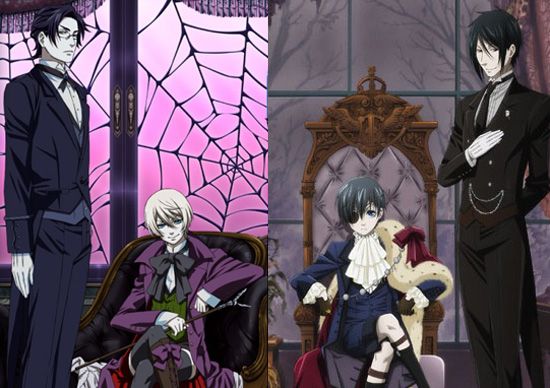 Instead of a new Butler and Master we now have the two Butlers facing off. Alois wants revenge on Ciel for the death of his brother and Ciel meanwhile is back to square one with his memory erased. He has entirely forgotten the events of the first season. This is another interesting set up. Again, none of this is exactly bad. Either of these plots could be interesting if done properly. However, instead half way through the story Claude kills Alois and decides to steal away Ciel’s soul. Removing the ambiguous evil vs. evil nature that made it interesting in the first place. Because even though Sebastian is a demon, Claude is the worse of two because he doesn’t even honour the contract made to his master. That being said, I still had fun watching Black Butler II, I would love to see another anime, or any story take these concepts and work with them to create something interesting.

Who knows maybe I will do so at some point in the future. Watching bad stories can actually by a great way to find ideas of your own stories, ask yourself what needs to be done to make this concept actually work? How would it look? What would it be like? It’s another reason why I enjoy watching bad anime or rather bad stories in general. In short I watch bad anime for two reasons. Firstly, because they can be a handy to guide on what not to do with a story, secondly because they can be great fuel for coming up for my own ideas.

4 thoughts on “Why do I watch Bad anime?”